For the past six months or so, Nora has been wanting to make money selling lemonade. I managed to convince her that not many people would buy lemonade in December in Seattle. But I told her that in the summer she could probably sell quite a lot if she set up a stand at my parents' house on a heavily trafficked street near the beach.

Last weekend was hot and sunny and my parents were holding a yard sale as part of West Seattle Community Garage Sale Day. Perfect! The day before the sale, Nora made signs, bought lemons and carried them home from the produce stand, juiced all of them, and helped me boil sugar and water. Sarah baked some cookies for her to sell too. We set out the next morning with our lemon juice, sugar syrup, ice, cooler, cups, signs, cookies, and red wagon. (She insisted on the wagon because she'd seen some neighborhood kids selling lemonade out of a wagon last summer.) 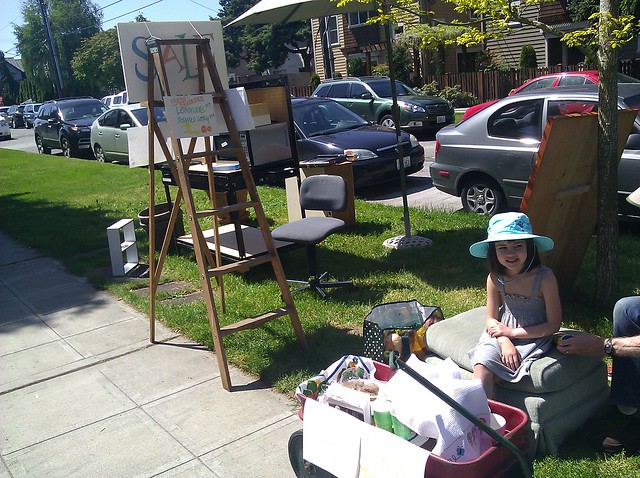 There were plenty of people out in the neighborhood, and Nora greeted everyone who passed by with an eager "Want to buy some lemonade and cookies?" She kept at it for several hours, stopping only when we were out of several supplies and I told her we needed to get home. Her share of the profit was about $15 (net of lemons and after sharing the cookie revenue with Sarah, the baker) which represents several months' allowance for her. Not bad for a five-year-old, I think!